Meet Steve Lavallee, General Superintendent And see why this industry always comes back to people.

“I was about six or eight years old. My mother told me that wherever any construction work was going on, that’s where I’d be.”

Steve Lavallee, General Superintendent of Penobscot General Contractors, has over 35 years of industry experience. His passion for construction didn’t just start earlier than most. It’s also what brought him out of retirement to work with PGC. 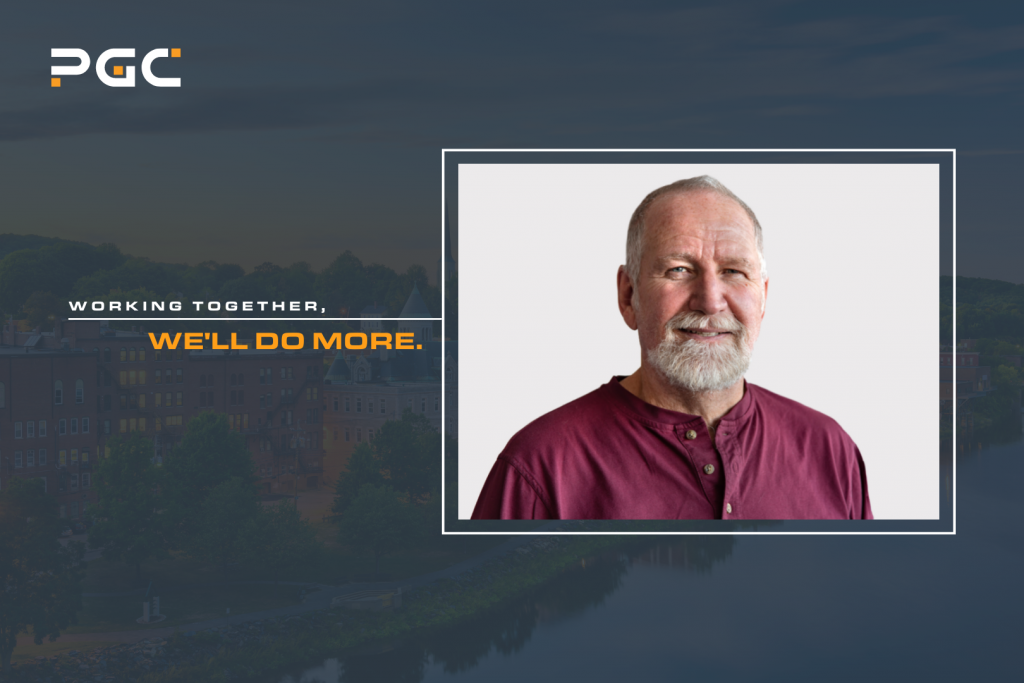 An early love for construction

Steve is a Mainer and was born in Augusta. While it would be years until he was on a job site, his interest was sparked early.

“I was about six or eight years old. My mother told me that wherever any construction work was going on, that’s where I’d be. I would just be hanging around on my bike watching them do the work,” Steve recalls.

After a stint in the service, Steve worked a few odd jobs here and there before he took his first construction job, building a house with a local contractor. Over the next 35 years, Steve cultivated experience managing projects as a superintendent and general superintendent, with new construction, renovations, multi-family residential, life science, office, educational, medical, hospitality, correctional, entertainment, and government buildings.

After leading many projects to successful completion throughout his career, Steve decided to retire.
However, that’s not where this story ends.

A VISION WORTH LEAVING RETIRMENT FOR

Steve worked with both Jon DiCentes and Clay Maker (the current Co-Presidents at Penobscot General Contractors) for years in previous positions.

One day, they called Steve up.

“We’re starting a new company. You want to come back to work?” Steve recalls their question. He talked with his wife and thought about it.

“I realized this was exciting because this company wasn’t new. It was 50 years old, but it’s new because now there’s a new vision,” Steve says. “It was a great company then, but they were limited on what they did for work. Here was Jon and Clay with a new plan to essentially build this new company from the ground up, and I was excited to be one of first employees on board.”

As General Superintendent, Steve oversees project performance including safety, quality, production, and cost controls. He helps guide the project team through decision making, scheduling, procedures, coordinating work, and change management – all while ensuring that all projects run as smoothly as possible.

Steve is currently on site at a luxury apartment unit, a U-shaped multi-story structure with a swimming pool and fire pits on the top. He’s helping manage the job and the subcontractors as the project makes its way to completion.

AN INDUSTRY LOVE THAT HASN’T WANED

As early as six, Steve felt that he should be on the construction site, and he was right. So what keeps him here?

“The people and the work,” Steve says. “I like mingling with all the subcontractors and it’s a good group of people where we still have fun even though the work is serious. It’s also the people that make the pre-planning possible. You get a bunch of people together that are involved with the project, talk about it ahead of time, and come up with a good plan. That’s what makes a project work.”

While Steve knows that PGC can build anything, it’s the company values that make him the proudest.

At Penobscot General Contractors, much of the team has worked together for decades.

“People want to work for us because we treat them with respect. We treat them fairly. We help them when we need to. We help our subcontractors get through projects successfully,” Steve explains.

“PGC is about people. It’s about being a part of the community, building places that put people to work and building places for people to live. Here, it’s not an employee number. We treat each other like family.”

“The sky is the limit for PGC,” Steve says. “There’s also some big businesses that want to come into the area, and there could be some very exciting projects up ahead.”

As for Steve, beyond the job site?

He enjoys spending time with his wife, married since 1978, and their grown daughters and grandchildren.

He also has his own construction project he’s working on. “I’m building a farmer’s porch for my wife right now because she wants to sit outside when it rains,” he says with a smile.

NEED US ON YOUR TEAM

At Penobscot General Contractors, we don’t just rely on our 50 years of success.

As industry leaders for five decades, we’re most proud of our values -people come first. Especially in this industry, people make the projects possible, and we will always prioritize our team and our partners. With a commitment to collaboration, transparency, and respect for everyone at our table, it’s our long-standing relationships that will continue to move us forward.

Known for our commitment to quality and the immense talent of our team, we’re construction managers with self-perform building experience that can help make any project successful. From Maine, to New England, or much further away, we’re the team you need most.

Working together, we’ll do more.

Through collaboration, communication and empowering the people we work with, PGC will serve as a trusted partner and surpass expectations every time, on every project.